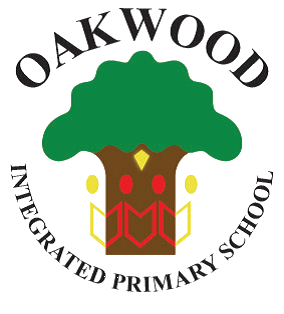 LEARNING, WORKING AND PLAYING TOGETHER FOR A BETTER TOMORROW

The Oakwood Integrated Primary School website aims to provide you with information about our school and showcase why the Education Training Inspectorate (ETI) deemed us 'Outstanding' in our January 2011 inspection.

In February 2017, the ETI conducted a Monitoring Inspection of the Primary School and found that Oakwood continues to demonstrate its ability to sustain improvement.

In January 2016, our Pupil Participation was recognised as exemplary and filmed for ESaGStv.

In May 2016, Oakwood IPS was awarded the Naace ICT Mark for a second time.

Our Eco Committtee achieved its 7th Eco Schools Green Flag Award in May 2018.

Please ring to arrange a tour, during school hours, to get a real taste of Life at Oakwood Integrated Primary and Nursery School.

P2 have been loving Well-being Wednesdays. Lots of them are...

Miss Stewart gave us some lovely ideas to choose from this...

Finn made a fabulous Tiny Dragon from Lego!

P3 have been using the Tiny Dragon image as a stimulus for...

As one of their tasks today, P.3 had to think of things...

Ring to arrange tours of both the Nursery and the Primary school, during school hours, to get a real taste of Life at Oakwood.